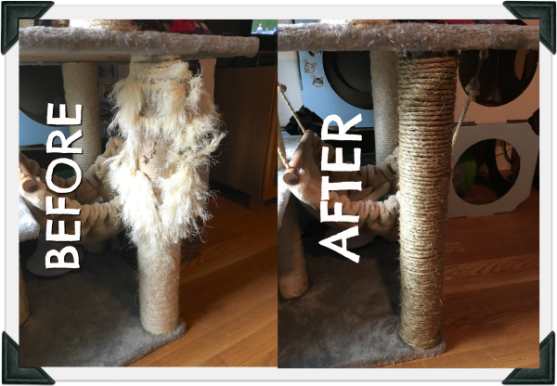 When Ben and Desmond were kittens, we bought this giant cat tree for them to play on. I even have this adorable video of the first time they ever climbed it!

If you have indoor cats, it’s important to provide them with furniture that allows them to climb and scratch. Being able to climb keeps their minds and bodies active in an otherwise mundane environment, and giving them something to scratch encourages them to destroy something other than your living room furniture! This tree has gotten lots of love over the past five years. In fact, it’s gotten so much love, the bottom scratching post has started to look a little… well, shredded.

I’ve been in a fixer-upper kind of mood lately–must be all that HGTV I’ve been watching!–so I set out to figure out a way to fix up the bottom leg of the tree without spending an arm and a leg.

The first thing I needed to do was find some twine that was roughly around the same width as what was used on the original. I found a package of twisted sisal rope at a local hardware store that seemed like it might do the trick. The shading was a little darker than the rope used on the original legs, but that didn’t matter too much to me. The best part was I bought the package of rope (100 feet) for less than $8.00.

The next thing I did was strip out most of the old rope that was already shredded from the leg. Most of the rope came off pretty easily, but there were a few parts stapled in that I had to wrench free.

All in all, it probably took me about an hour and a half to complete this project. I am so pleased with how it turned out! The cat tree looks almost brand new again! Let’s just hope I glued the rope on tight enough for it to last this time. 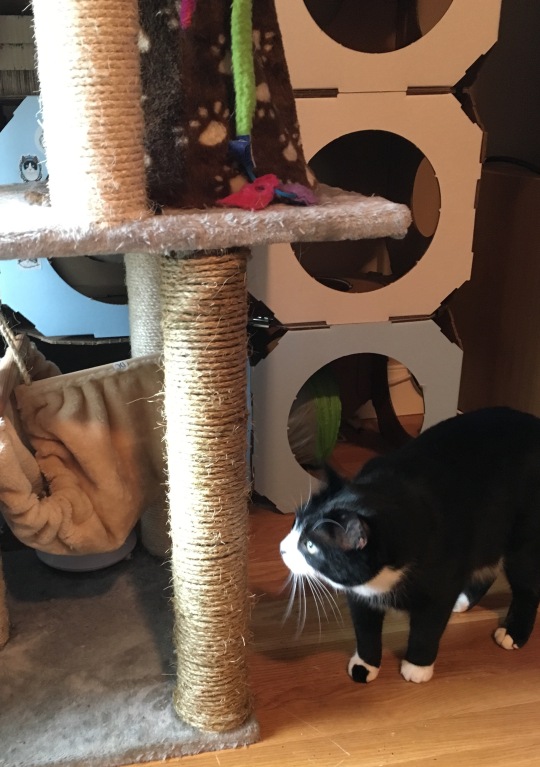