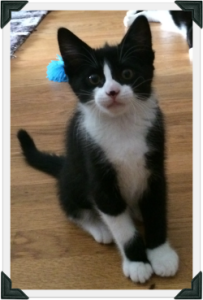 Life after Desmond has been difficult. Waking up in the morning without that familiar lump on my feet those first few days was horrible. Putting out dinner for two cats instead of three was depressing. I can’t even begin to tell you how many times I have cried thinking about him. We truly miss him with each passing day and he will always be one of the original members of our beloved trio.

A few days ago, I began looking for another kitten. I couldn’t help myself. Our place just felt so empty without him…and it is kitten season, after all. I told myself I would just look at first. If something happened organically, then it was meant to be. I wasn’t going to force anything. I emailed with a few people about kittens, but nothing materialized for a few days. Then on Friday, I found him. His mother is a tuxedo herself, and when I saw him it was love at first sight. I picked him up that night. True to our obsession with naming our cats after characters in LOST, my husband and I decided on a name to continue the legacy: Hugo. (Because everybody loves Hugo!)

So far, Jack and Ben have been somewhat accepting of Hugo. At first, they weren’t too sure about him, but Jack and Hugo have been running around our apartment today. And I have caught Ben cleaning him. They aren’t best friends yet, but I think they will be soon. Hopefully Jack won’t hate me forever for bringing a new baby home. He will just have to get used to being the middle child!